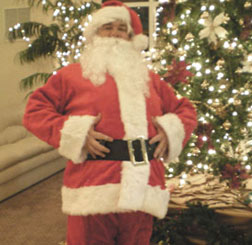 We are proud to be Santa's helpers in bringing entertainment to all the good boys and girls of corporate America, and in this case helping you to know a bit more about the jolly old soul himself.

We work with your holiday planning committee to come up with a selection of improv comedy, game shows and murder mysteries, along with the ability to Emcee your party, look no further to find a way to celebrate with your employees!

St. Nick is a lot more than just Santa!

Saint Nicholas of Myra was born in the 3rd century in a port town on the coast of what is now Turkey. Speaking in his native tongue, Greek, he stood up for justice and was known for being a champion for those who could not stand up for themselves. Whether it was confronting a judge who had been bribed to prevent a beheading or slapping an Arian bishop who argued against the Trinity, his reputation had spread far and wide.

Gift giving from the Jolly Old Soul came from both the story of providing gold to a father to get his daughters away from prostitution (not a very good holiday story) and to solving a murder mystery of three children where he allegedly reassembled their bodies and resurrected them (thus why murder mystery dinners work well for Christmas).

The newly traditional red and white suit comes from depictions in Coca-Cola commercials (yes, a client).

The reindeer? While not part of the Saint Nicholas tradition, they were added later on. The famous names include Dasher, Dancer, Prancer, Vixen, Comet, Cupid, Donner, Blitzen, and Rudolph (though he couldn't play in reindeer games).

The North Pole? While far from Turkey, the legend started to move further and further away from Saint Nicholas of Myra. The North Pole had been considered a location away from prying eyes and the holiday was more and more associated wth the cold of winter. The two came together and you have a fabled and mysterious location for Santa to operate from. Maybe he sublets to Superman for his Fortress of Solitude. Thank you to Thomas Nast and Harper's Magazine.

You can learn more about the history of Santa Claus on the website www.the-north-pole.com.

© Copyright 2020 THEY improv - All Rights Reserved